Receive up to $500 off select homes

Transportation in Sacramento and Antelope, CA 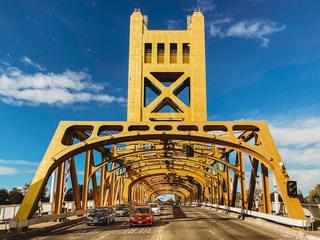 Sacramento is largely a car-dependent city — especially if you live out in the suburb neighborhoods, like Antelope, CA. However, we do have a transit score of 34 out of 100, which indicates some transit. The light rail and bus systems provide somewhat efficient transportation around major areas. It only takes one transfer to get all the way from the Arbors to downtown Sacramento, and there’s a bus stop right in front of our living complex. The city also supports car traffic well with parking infrastructure downtown and in other major areas.

Driving is the biggest way Sacramento locals get around. It’s good to get familiar with the parking services offered by the city, which includes a robust infrastructure of:

Driving around means parking at home is also important. At The Arbors, our single family home apartments have assigned parking that is covered and right outside your door.

The light rail and bus systems run by the Sacramento Regional Transit District help residents get around pretty efficiently if they prefer not to drive.

The Arbors has a stop for the number 19 bus — known as the Rio Linda — right out front, which connects the Antelope area with the right of North Sacramento and with the blue line.

The Rio Linda stops at:

At Arden, you can transfer to the blue line on the light rail system, which will take you right into the heart of downtown Sacramento.

The airport is a short drive from The Arbors (only a 20-minute drive) but you can also take the airport express from the downtown Sacramento area straight to the airport.

This shuttle works like Uber, but for a shared bus. This service uses a smartphone app to allow users to request pickup. It’s a great way to get around Sacramento, especially in areas where you’re not near a bus stop. Antelope, CA is a big part of its service area, and it helps make up for the lack of light rail out here.

The paratransit service especially for older folks and folks with disabilities. Similarly to SmaRT Ride Shuttle, this shuttle service uses a smartphone app to help Sacramento area citizens take rides around the district.

There are a few different Amtrak stations in easy distance of Antelope, CA. There are two Roseville stations and a few stations in downtown Sacramento. Amtrak is a great way to access the rest of the state.

The Capitol Corridor Amtrak line takes Sacramento area citizens right into the Bay Area with stops in Oakland, Fremont, and San Jose. This is a great way to get into the big city, or you can transfer to another line to go even further.

Like the rest of the Bay Area, Sacramento is big on biking. There are more bikeways closer to the center of Sacramento, but Antelope is a quiet town with plenty of safe biking paths. You can check out a map of our bikeways online.

Vanpool is a great resource for commuters in Sacramento looking to reduce their transportation costs. Sacramento also subsidizes vanpools as an incentive, making them even cheaper and easier to organize.

For a simpler option, Sacramento also offers incentives and services to those who carpool into work. They run an Emergency Ride Home program so those who may need to suddenly leave work can do so without relying on their carpoolers to leave work early, too.